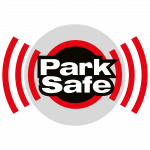 Parksafe Automotive are proud to announce the 360º Birds Eye View Camera System. Our 360º camera system consists of four ultra wide angle HD cameras which are mounted to each side of the vehicle. The crystal clear camera images are cleverly stitched together, resulting in a LIVE 360º, birds eye view all around the vehicle. With a conventional four camera set up, hazards can still be missed due to the cameras fixed viewing angle, obstructed views by the vehicles bodywork and by having to focus on one of four different views on the monitor. The limitations of a standard four camera system can make manoeuvring the vehicle significantly more difficult in built up areas and blind spots present a high level of danger for both the driver and pedestrians.

Parksafe’s 360 degree camera system has been specifically designed for use in today’s worksite environments where safety is paramount. Ease of installation and calibration is appealing to the purchaser, whereas the simple to use 360º system offers the operator increased safety and protection with complete 360º vision. The versatile 360º system also provides the driver with multiple viewing options when selecting reverse gear and left or right indicator. 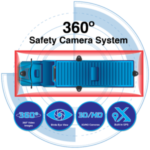